Yip, it’s definitely that time of year: a spoonful of chaos added to a cupful of busy-ness!
I have to be very disciplined with my days, to get everything done. But there’s many a curveball along the way: emergency cases at the hospital, load shedding, burst pipes … and that was just the past three days!
So Monday comes as a relief: the electricity is on; water’s flowing from the taps, and the kids are at school, so I  can get some Christmas cookies baked.
And post a recipe – it’s been a while, I know!
Actually, it’s only half a recipe, just the icing on top: cinnamon & brown sugar buttercream.
(I’m on a tight schedule here, ok!? 😅) 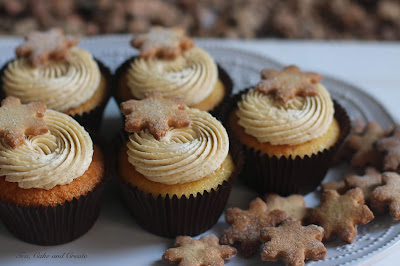 The cupcakes are nothing new, just some of these tried-and-tested vanilla cupcakes, filled with a little jam.
I was going for a jam /cinnamon donut kind of flavour experience, and a hot-milk sponge with a centre of smooth apricot jam was a good base to work from.
That, and I already had some baked and in the deep freeze begging to be used 🙈 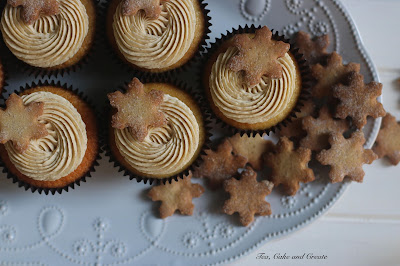 125g butter
100g brown sugar
150g icing sugar, sifted
2tbs creme fraiche (sour cream), alternatively use cream cheese
1/2 – 1tsp cinnamon (depending on how cinnamony you want it)
1tsp vanilla extract
Beat the butter and brown sugar together until light and creamy.
Add the sifted icing sugar, cinnamon and vanilla. Beat well.
Beat in the sour cream or cream cheese. This is just to cut the sweetness of the icing, so it’s optional… but recommended!
Makes enough icing for 12-15 cupcakes, depending on how elaborate your swirls are. Double the recipe if necessary. For the cupcakes – follow the recipe link above.
Once the cupcakes are baked and cooled, either use an apple corer to core out a centre to spoon in the jam, or
use a large round tip (french tip, pastry tip) to pipe the jam into the centre of the cupcake. Top cooled cupcakes with brown sugar buttercream.
Add a mini lightly-spiced cookie for decoration.
Happy baking!
xxM