Now you really don’t need to ‘pop these, but you have to admit – sweet treats on a stick have a certain appeal, don’t they?
Not to mention the appeal of avoiding sticky fingers.
(Or – no judgement here – is licking the sticky remnants of donut off your fingers one of the best parts for you??)

Well, anyway… these donuts actually aren’t sticky. They’re covered in chocolate, real chocolate, not a chocolate glaze.
Not because I have anything against sticky glaze-covered donuts, but simply because you’ll be melting chocolate for the popsicle sticks anyway.
(Well…that’s one reason, but I won’t elaborate on the chocolate misadventure that resulted in these particular creations, now. Remind me another time, ok?) 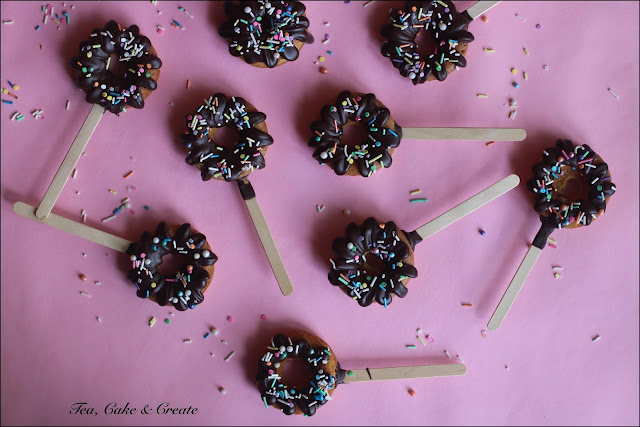 Pour the batter into a ziploc bag; snip off one corner, and pipe into the donut pan (this way is much easier than trying to spoon it in!).
Don’t over-fill the pan, because you’ll lose the donut hole (they’ll still be delicious though!)

I found this recipe makes a little more than my mini-donut pan can take; I just keep the extra batter aside for a few more donuts in a second round of baking – I only have one donut pan!

Remove from the oven and cool in the pan before turning out. 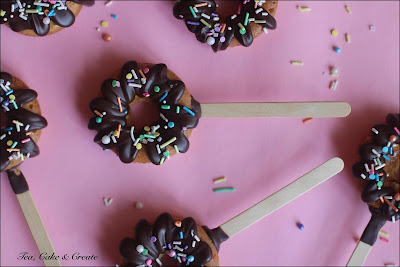 Dip popsicle sticks in melted chocolate then gently push into the donut. Allow the chocolate to harden.

Pipe more melted chocolate onto the donuts; top with sprinkles before the chocolate sets. 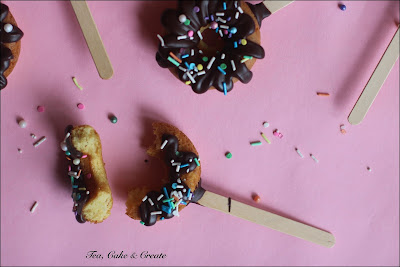 If you want to use a glaze instead of chocolate, visit sallysbakingaddiction.com to see the original recipe.