It’s nearly time to pack up the macaron-making equipment now that warmer, wetter weather is on it’s way. Because, trust me – if you haven’t tried making macarons yet, the humid months are not the time to start! There are enough variables in macaron-making already. I choose to avoid the stress of doing it during climatological conditions that are outside of my control. Not that I have control issues, or anything…!

But, while we still can: let’s go out with a berry blast…

These macarons are filled with a combination of white chocolate ganache and mixed berry jam.
It’s important to use a good quality jam or preserve, with lots of real fruit – you want to taste the tartness of the berries through the sweetness of the white chocolate. 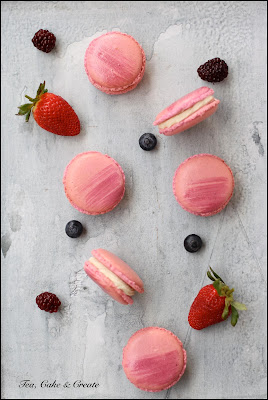 3 egg whites (100g-110g), at room temp. Aged for 2-3 days.2 tbs (30ml) caster sugar1/2 tsp cream of tartar200g icing sugar125g ground almonds/ almond flour
A few drops of purple/pink gel colourPrepare baking trays with parchment. Make sure that the parchment is flat and that the trays aren’t warped.Pulse the almond flour and icing sugar in a food processor until well mixed and finely ground.  Sift into a bowl. Discard the large granules which don’t pass through the sieve.Whisk the egg whites at low speed with an electric beater until frothy, then add the cream of tartar. Beat until soft peaks form, then add the caster sugar, slowly down the side of the bowl.  Beat at high speed until stiff peaks form. Fold in the gel colour. Sift half the almond flour / icing sugar mix into the meringue and fold in.   Then sift in the remaining almond flour and icing sugar. Once again discard any large granules.Use a spatula and a figure-of-8 motion to gently fold the batter until it is loosened and falls in “ribbons” from the spatula.(This is a tricky part – as you need to avoid both under-mixing, and over-mixing!)  Transfer to an icing bag with the tip cut off or one fitted with a large plain round icing nozzle (not more than 1cm diameter).Pipe small dots of batter beneath the corners of the baking parchment to keep it in place on the baking trays.Pipe your macaron rounds – about 3-4cm diameter, about 2cm apart. Pull your piping tip to the side – this leaves a tiny tail, which will settle. Rap the trays twice on the counter to release air bubbles. Now, turn on your oven to 150’CLeave the macarons to stand for approx. 30minutes until they form a “skin” – ie. when touched with a clean, dry finger they aren’t sticky.Bake at 150’C for 15-16 minutes.Check that they’re not browning as the end of the baking time approaches.Leave to cool for 5 minutes, then remove the macaron shells from the trays. If they are undercooked, they will stick to the parchment. You can pop them back into the warm oven for a few more minutes just to dry out a little more.(Macarons are best after being filled and left for 24hrs – the filling rehydrates them a bit.) 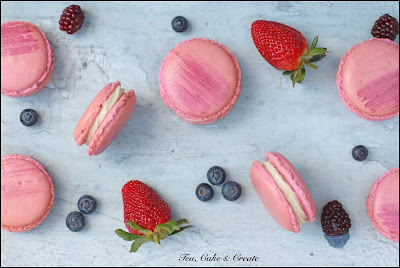 White Chocolate Ganache
150g white chocolate, broken into small even sized pieces
50ml cream
Place the white chocolate and cream in a heatproof bowl over simmering water. (Don’t let the bowl come in direct contact with the water).
Stir occasionally until all the chocolate has melted.
Alternatively, microwave for 30second bursts, stirring in between – until the chocolate has melted, and the ganache is smooth.
Allow the ganache to cool and firm up until it reaches a pipe-able consistency.
Pipe a ring of ganache on a macaron shell. 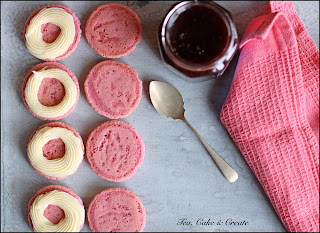 Add a spoonful of jam into the centre. Sandwich with a second macaron shell. 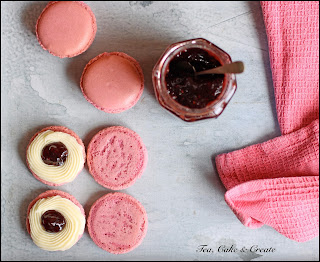 Refrigerate the assembled macarons overnight. Allow to come to room temperature before serving. 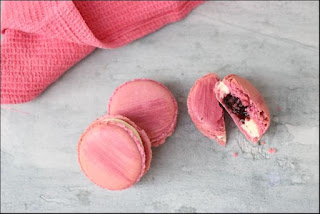