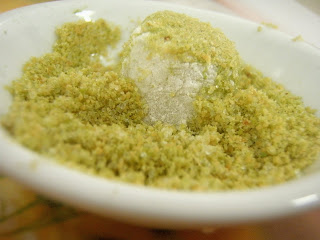 Sandstorm Snack
The original is just a simple glutinous rice ball but I shaped it to be like a cube after pressing the round glutinous rice ball at six sides to look like a mini cube. Then boil in boiling water (steam it, if desired) and place on a plate of glutinous rice flour (toasted in the oven) to coat it.
Lastly, into the Macha Peanut Coating and giving it after a sandstorm effect! 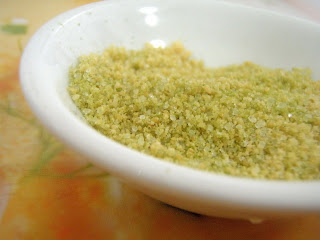 Macha Peanut Coating …
Kinako (soybean powder) coating is a basic ingredient for Warabi Mochi. And there is a different variant – Macha Kinako Coating,with green tea powder added to it (other spices like cinnamon can be used). Since I don’t have soybean powder in the kitchen, I used grounded peanut powder to make Macha Kinako Coating which is not as delicate and fine comparing to soybean powder …
From Essentially Japanese Cooking & Cuisine, Mattcha-kinako coating recipe – Mix 1 teapsoon mattcha (grean tea powder), 20g sugar and 15g kinako (soybean powder)